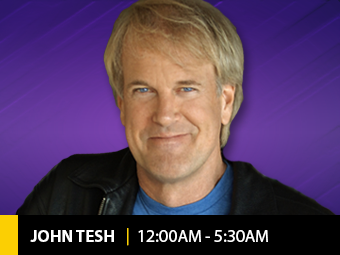 In an impressive and eclectic career that spans more than 25 years, John Tesh is known worldwide as a leading and respected figure in the entertainment and broadcasting industries.  In 1996, after 10 years as co-host of “Entertainment Tonight,” he surprised many by leaving the highly visible position to pursue his career as a fulltime musician.  For generations music and radio have gone hand in hand and, Tesh has conquered yet another media format as one of the most successful syndicated radio show hosts in the country with “The John Tesh Radio Show: Music and Intelligence for Your Life.”

“I like to call it ‘purpose-driven radio’,’” says Tesh of his award-winning daily and weekly show that is heard on over 240 stations nationwide by more than 8 million listeners.  Tesh created the show for his wife, actress Connie Selleca, because “her nightstand was covered with the last 20 months of the Oprah magazine.” The show is owned and distributed by The TeshMedia Group and airs in all dayparts, on multiple formats.

“We wanted to create a show for that person, the person who doesn’t have time to find all that stuff, but is interested in being better in everything that he or she does,” explains Tesh.  The show is full of genuine advice and tips - nothing pretentious or haughty - with a mix of humor and earnestness. “We appeal to people who want to make a change in their life, whether it’s to be a better parent or a better pet owner.”

Some of these tips: Always wear blue to important meetings as it is a subversively powerful color; throw dishwashing sponges (a haven for germ breeding) into the dishwasher or microwave oven for sanitizing every other day; and, the amount of time one should spend brushing his own teeth is the same duration of the song “Yellow Submarine.”

The latter is a clear example of how Tesh and his sense of humor about life in general can drive home the points of what is really important in our lives.  And, numerous accolades from radio colleagues and listeners confirm Tesh’s popularity.  Recently, “The John Tesh Radio Show” was named the “2006 Radio Ink Reader’s Choice Award” winner in not one, but two categories: “Best Daily Music Program” and “Best Weekly Music Program.”

"Planting seeds and encouraging people with the program and my music is a method with which I am truly comfortable,” says Tesh. “‘Music and Intelligence For Your Life’ is a safe haven for family listening. Children, men and women of all ages can gain something from the show."

The message of his radio show follows Tesh to his live performances.  “The radio show leaks into the stage show,” admits Tesh.  Both in the talking he does on stage and in the “Intelligent Life Game Show.”  If you follow his career, it becomes obvious that music has always been Tesh’s main passion. Three of Tesh’s releases, A Deeper Faith, Christmas Worship and Power of Love all resided on the Billboard Pop and Christian Music charts and, Power of Love was nominated for a 2003 Grammy for “Best Pop Instrumental Album.” With the release of A Deeper Faith 2 and his book "The Power of Prayer and Worship,” Tesh stepped further into a world in which he desires only to be 'useful' to others.  His acclaimed, family-friendly CD and DVD, Red Rocks Platinum, was also a hit national television special. And, Tesh’s first live Red Rocks concert from 1993 was a best selling and RIAA Gold-certified CD.

"Twelve years ago, in a driving rain storm, with my wife and two-month-old daughter in the audience, my life changed forever at the Red Rocks Amphitheatre," comments Tesh. "The Public Television program we filmed that evening went on to become one of PBS’s most successful fundraising specials ever. It also enabled me to make a giant leap out of television and into the world of music, my first love."

Now, more than a decade later, Tesh has once again created an amazing project in God’s natural amphitheatre in Red Rocks Platinum. This worldwide television event featured favorite praise and worship songs such as “You Are Good,” “I Can Only Imagine,” “Lord Have Mercy” and “Above All,” plus many new pieces created especially for the occasion.

Tesh has long been an advocate for the power and encouragement found in worship music. And so it's no surprise that one of Tesh's regular gigs is music director in his Sherman Oaks, CA, church.

Despite his various professional hats, Tesh considers being a father and husband his “greatest accomplishment.”  "When you have a 12-year-old little girl in your house, you suddenly realize that you need to pick a vocation that the kid can actually share with the rest of her class," says Tesh.

As a television host, recording artist, music director and syndicated radio show host - John Tesh has explored and succeeded in all of these facets of the entertainment industry.   With three gold albums and a career that includes six Emmys, two Grammy nominations, an Associated Press Award for investigative journalism, a Keyboard Magazine Award, several number one radio hits, three hit PBS specials and two tours as an Olympic announcer/composer, it’s obvious that Tesh has a drive for versatility.

2007 shows no signs of Tesh slowing down. With more stations picking up his radio show almost weekly, the Renaissance man is also in the pre-production stages of his next PBS special.  He is also in the process of writing his second book.

Tesh lives in Los Angeles with his wife, actress Connie Sellecca, and his twelve-year old daughter Prima.  His recently married 24-year-old son, Gib, is also a key member of the TeshMedia Group team and is featured in Tesh’s live concerts.  For more information on “everything Tesh,” please visit Tesh.com.